All aboard the pain train at Walsall Arboretum parkrun! Photo by Ron Reynolds

An unconventional week, though no worse off for it.

It’s normally expected that I feel worse the following day after a race. When I feel about the same, if not better, then I know that I there was something more that I could have given. This held true here, where the Aldridge 10k barely felt like it touched my sides! Frustratingly, my glutes began firing correctly, whereas they were noticeably dormant during the race…

7 miles from the Jewellery Quarter

It’s not very often that I find myself in the Jewellery Quarter these days, despite it being home for four years.

This particular route allows me to chop about 2 miles out from my normal 9.5 mile route from the office, whilst still keeping it at a reasonable distance. The reason for this was two-fold: I wanted to softly begin tapering ahead of the upcoming Wilmslow Half Marathon by reducing volume, and I had a track session pencilled in for the following day and needed to be relatively spritely to capitalise on it.

Ah! A rare outing to visit the University of Birmingham running track! Can you believe it was before Christmas that I was last there?

As anticipated, I was on my own and used the official entrance to get in rather than skulking through bushes and in-between fences. Some gardeners were tending to the grounds in preparation for upcoming school sports days – every time I’ve visited, there have been gardeners present!

Despite being pretty well sheltered by surrounding trees and buildings, a breeze persisted to be felt on the final bend, home-straight and first bend! The sun came and went overhead, resulting in me opting to run bare-chested and work on my tan whilst I was at it.

Factoring in that GPS and 400m running tracks don’t gel well together, here are the splits:

The session, though challenging, was incredibly satisfying to complete. The track surface is beautiful to run on with plenty of traction, feedback and propulsion from its surface. I was able to lose myself in the running and not require keep an eye out for others as I often need to on the canal towpath. I couldn’t stop sweating at the end of it and was thankful I had a bottle of water with electrolytes for between reps and afterwards.

Here’s the Strava data for this session.

7 miles from the Jewellery Quarter

Very much a repeat of Tuesday’s run, though I felt dramatically worse due to ill and poor preparation beforehand from the office.

It’s traditional the week before a target race that I seek out a fast effort from a parkrun. A bout of focused pace, that’s not too taxing in terms of recovery, does wonders to sharpen up.

In need of a return visit to Ikea, Walsall Arboretum parkrun made a lot of sense, especially after Dave Burton’s fresh PB from last week on the fast and flat course. Dave was game for another bash on the course, so came along. Sadly, conditions weren’t quite as optimal as a week ago, with noticeably more wind blowing, and drizzle leaving the ground underfoot slightly slick. Saying that, though, my 18:14 PB from the course in 2016 was run in wet conditions, so who’s to say what’s possible anymore?

Lis and Dave’s brother, Paul, were present for spectator duties with the course affording six opportunities to spot runners from a couple of vantage points.

A decent warm-up in the bag and we assembled on the start line. I was genuinely nervous and could feel my heart racing away; I knew what would unfold would be painful, no matter the outcome!

The start was fast as anticipated with me falling into place outside of the top 10. My target pace for the morning was 3:38 to 3:40 per km; hanging on to 3:40 for the opening split felt harder than it should have – most likely due to the Aldridge 10k and Wednesday’s track session still remaining in my system.

I found myself occasionally flanked by a couple of guys, though I seemed to be doing the lion’s share of the work in pacing terms. I would have joined the group ahead, but over 5k pace, they were too far off in the distance to reel to leave me reluctantly in place.

Whereas I’d started off on target pace, I just couldn’t sustain it and ended up falling back to around 3:50 per km.

Walsall Arbortum parkrun is a compact, three lap course. Entering the second lap, I began encountering slower runners and occasionally had to bellow out, “Keep left,” just as the marshals did. People seemed to take it well enough, with one lapped lady cheering me on as I passed her sounding like a steam train. I was in a hell of my own making!

GPS seems to struggle on the Walsall Arboretum course, with measured distance all over the place. Historically, I’ve felt the course is potentially short, though this would make little sense as the start and end positions are not dictated by necessity and could easily be moved further apart if the distance is indeed short. With a supposed km remaining, I was unsure how near or far away I was from my secondary goal of a new PB that morning. It wasn’t until I had some 500m remaining that I realised I was in with a shot of breaking new ground if I could lay down a big kick… 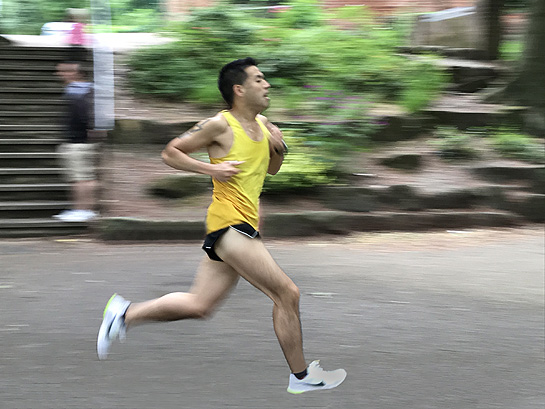 Rounding the penultimate bend, I tried with all my might to put rubber down to the ground for something substantial, but it just wasn’t happening. Even with the gentle descent all the way to the finish, I simply couldn’t generate the necessary power to keep up with the several guys that rapidly passed me. The look on my face in the photo at the top of this post says it all!

Crossing the line drenched in sweat from the effort, it was bitter-sweet to learn I’d run my fastest 5k in 2 years for 18:22, also my third fastest 5k of all time, but still needed 9 seconds to challenge my 18:14 PB. Working my way through the funnel, I was surprised to discover one of the guys that stuck to me like glue was the same chap that narrowly beat me to the line at the Aldridge 10k! Tom joked that I had become his personal “tormentor”, though I reassured him that I would not be in the vicinity any time soon to put him at ease.

Frustratingly, my official plastic barcode failed to register in the system for me to end up with an unknown result. The barcode scanned because I heard the audible beep, so I’ve binned it rather than allow it to wreak any more havoc. Kindly and swiftly, the Walsall Arboretum team amended the issue for me within a few hours with no fuss – thank you!

A little more to come with some focused pace work, though I’m struggling to think of where I can find another 23 seconds to break 18 minutes!

12 miles – to Brindley Place and back

Whereas I would have normally gotten out for my run in the morning, I ended up sleeping in and completing a few errands before needing to be somewhere for lunch time. Before I knew it, 3pm had rolled around!

Conditions were deceptive; on the surface, the afternoon appeared to be cool with overcast skies. The reality was noticeable humidity to leave my t-shirt drenched – I really should have worn a vest.

People say you should leave around 3 hours after eating a meal before attempting to run. Personally, I stick with 2 hours for carbohydrate-rich meals with low protein, and nearer 4 hours for protein-rich meals. Well, I had a protein-rich meal comprised of dim sum to leave me pretty uncomfortable!

To make matters worse, I enjoyed a tailwind on the out leg, only to be faced with a headwind on the return to add to the discomfort!

I definitely prefer running long in the morning on Sundays, where I feel like it has far less of an impact on the rest of the day.