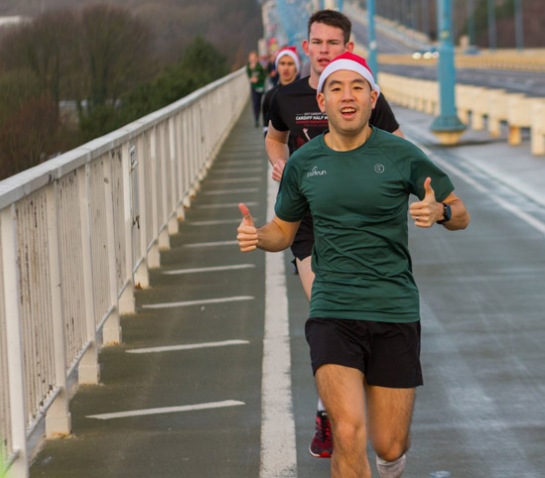 Well folks, I promised you all that I’d continue this blog when I next had something to write about. I was fortunate enough to recently visit the incredibly novel and iconic Severn Bridge parkrun.

Friend, and relatively new dad, Ben had a pass to join me, so a plan was hatched. Spending the days leading up to Christmas in Wales, Severn Bridge parkrun was the only choice for my Saturday 5k fix, and seemingly many others as the Welsh-English border toll was recently abolished.

So, what makes Severn Bridge parkrun novel or iconic? As suggested by the event name, and as is common with many newer parkruns of the last year or two, it doesn’t actually take place in a park but rather the old Severn Bridge. As well as the novelty of running over a bridge, the course also takes runners from Wales to England and back, whilst passing through no fewer than three different counties (Monmouthshire, Gloucestershire, and Avon). Also of note is the net-downhill nature of the course, where the finish line is situated below the start line.

Rocking up at the designated parking location (a football club in the middle of a housing estate), there was already some hustle and bustle as people geared up for the event’s first festive themed run; Ben and I made a token effort with our Santa hats. We warmed up on the bridge itself on what was a glorious morning, with blue skies, mild temperatures and little wind. Passing cars were also in good spirits, honking their horns on sight of our Santa hats.

The pre-run briefing was also suitably festive themed, with a season-inspired poem. I got a real sense of the effort and pride that the core team put into the event. Speaking with the event director afterwards, he shared with me his initial fear that nobody would show up on their inaugural and subsequent events.

Towing up on the start line, I really had to work my way through the crowd to get to the front. Ben commented that I had a strong likelihood of placing highly, with the previous week being won in 19:32, and an event four weeks ago being won in 19:52! Being the event closest to Christmas Day meant there were visiting runners aplenty, like myself. A crude tip for spotting faster runners: look at their shoes. If they look fast up top and are wearing racing shoes of some description, they probably know what they’re doing. I clocked one such chap, matching the above description, but also wearing a tactically chosen Mrs Claus outfit for mobility and airflow underneath! He looked familiar, but I couldn’t quite put my finger on why…

On the timer’s word, everybody was off.

A visiting under-13s football team embarked on their first parkrun. Inevitably, they all shot off ahead of me whilst I opted not to give chase; I was confident none of them would remain in front of me for very long, especially as I was registering 3:43 pace myself in the early scramble!

I felt fantastic – a far cry from how shoddy I’d felt the previous day on a gentle 10k run from Lis’ parents’ farm.

Steadily, I overtook each and every member of the football team as the course subtly climbed. The elevation data makes it out to be a lot worse than it is, really! Several more runners were overtaken as I found my stride, continuing to feel super-charged.

Nearing the halfway turnaround point, the guy dressed as Mrs Claus came hurtling towards us on the other side of the course. Suddenly, I had my Thomas Edison light bulb moment and realised why he looked so familiar. He was the Swansea Harrier that stopped to help the Chorlton club runner across the line at the London Marathon in 2017! He was visibly in full-flight, with both feet off the ground with each stride, taking advantage of the downhill second half of the course.

Somehow, I smoothly navigated the switchback cones and injected a slight surge to maximise my time on the downhill return. Soon, I caught up to the chap in sixth place and took shelter in his slipstream for a few moments before running shoulder to shoulder with him. He broke the silence by asking how I was doing and I reciprocated. We were both probably running at about 8/10 effort by this stage, so words were still reasonably plentiful. It was Stu’s first ever parkrun, but he had trained regularly on the bridge itself citing a 21 minute best over 5k. I shared with him that we were comfortably going to finish in under 20 minutes, so long as he stuck with me. An alliance was established as we ploughed on to catch the next runner ahead.

With 1km remaining, third and fourth place were within sight but were also doing their damned best to get away, leaving the distance between us more or less static. Exiting the bridge, we made a hard left to head down a paved, but narrow, path. I lengthened my stride whilst remaining cautious to not lose my footing on such a high-speed section. I could hear Stu on my shoulder still, so I injected a bit more pace to put some daylight between us. Exiting the path, we entered a tunnel for another 50m or so of sprinting before crossing the finish line in fifth, with Stu bringing in sixth place.

Some timing shenanigans were at play for I registered 19:17 for myself, yet the system somehow gifted me an additional 7 seconds for 19:10 via the results. Stu received 19:17 officially, so I suspect the timer may have pressed the timer twice for the guy in fourth place.

I congratulated Stu on a well-executed first parkrun and urged him to visit the event more regularly, as he clearly had some innate talent.

Wishing to confirm my thoughts from earlier, I approached the first place finisher in the Mrs Claus outfit and asked if he was indeed Matt Rees of Swansea Harrier and London Marathon fame. He acknowledged he was and I shook his hand for doing the right thing at the London Marathon, and also for breaking the course record that morning in fancy dress!

Ben came back in, but confessed he’d forgotten to start his watch so he had no clue what time he registered. It so happened he’d actually bagged a 10 second 5k PB for himself once the results came through!

It was a thoroughly enjoyable morning, further bolstered by the festive season in full swing at the event. Those seeking speed could find themselves running decent times, courtesy of the downhill second half of the course. Those seeking a rather unique parkrun experience should definitely give the event a go!