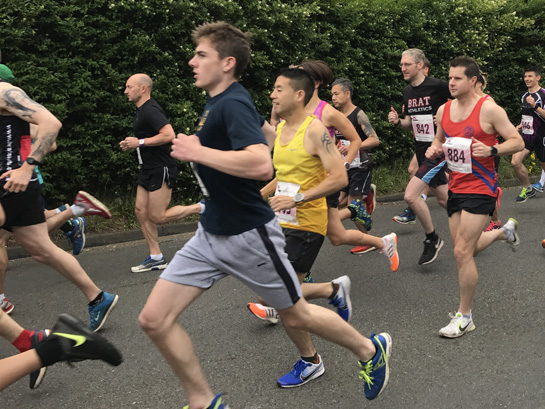 Covering the recent Aldridge 10k at marathon pace felt like the right thing to do at the time, but the race felt somewhat hollow and unsatisfying. I’d worked hard over the years to get to a sub-40 10k performance, and last year looked like the first time where such a finish time was unlikely to trouble me except on the most hilly of routes.

By comparison, the Wythall Hollywood 10k carries a much gentler profile, even with its two 1km long climbs over 2 laps. Last year was the first time I ran sub-40 on the route, also sharing the joint-honour as my 10k PB course (the other race is the Magor Marsh 10k). With this week technically classed as my cutback week, a sub-40 performance would dovetail nicely as a lactate threshold session to try and widen my arsenal of paces. Darryll Thomas, whom I first met at the race three years ago, also wanted a sub-40 performance, and so the goal was set!

There’s a lot going for this race and I can’t stress enough how much there is going for it. It seemed others have also finally caught on to it, because it looked like there was a new attendance record at almost a thousand based on bib numbers – perhaps this will persuade the organisers to give chip timing a shot next year, which really is the only thing that lets the race down, especially for those caught up in the middle or back of the pack.

Bib collected from race HQ, I recognised sizable representation from BRAT, Bournville Harriers and Kings Heath Running Club, with a couple of other clubs also in attendance.

Arriving slightly later than originally planned for, I made a beeline to get my warm-up in, which probably could have been at least another 0.5 miles longer in an ideal world. Nonetheless, I breathed a sigh of relief to have gotten all of my pre-race admin completed with a little time to spare to catch-up with a few local faces I recognised. However, there was still no sign of Darryll Thomas…

It was time to assemble on the start line and with just minutes to spare, Darryll finally appeared for our joint-venture to share the sub-40 effort. We noticed we’d somehow positioned ourselves behind several kids, so a wide berth off the line was factored in. “3-2-1” and the beginning of circa-40 minutes of lactate threshold hell had begun…

We both settled into race pace early on and commented that we would reel plenty of people in who had taken off at what was more likely their 5k pace. Confusingly, this may have actually held true for those in the much smaller 5k race. I pointed out a couple of faces to Darryll who we likely wanted to keep an eye on as ability barometers that typically aligned closely to us; worryingly, Barry Fallon had built up quite a lead of some 200m in a matter of minutes, so he was off the radar, though a Bournville Harrier that’s always a couple of steps ahead of me at all distances continued to track closely. 1km came in at 3:58 to be precisely on target.

The course throws a lengthy climb in, lasting a little over a km and needing to be tackled twice. Darryll and I both commented that attendance was noticeably up on previous years, where we’d historically finished in the 41 to 42 minute range to find ourselves running in no-man’s land. On this occasion, there were plenty of people around us with positions often chopping and changing. Whereas we’d agreed for me to do the heavy lifting on climbs, Darryll kept pace with me for much of the ascent, with the split slowing to 4:10 and staying firmly to plan.

Our plan had us taking advantage of the high-speed downhill section after the climb to recover some of the damage, and to also buffer a little time for the second lap. Darryll took the reins and paved much of the way on the descent, with me in tow. With a 3k split of 3:50, we were back on target and eased off slightly for some recovery.

The ever-present chap with his hosepipe was once again on the scene to cool us runners down. The sight of him and access to multiple water stops got me thinking that, despite the total 2km of climbing, the course is conducive to fast times. Athletes are able to better manage the heat of racing, with several people and me citing the course as home to their 10k PBs. I’ve run much flatter 10k races historically, but as single lap events with a single water station, it becomes much harder to continue red-lining when you’re overheating at just halfway.

One of the kids from the 5k race was able to stick with us, and regardless of the very wide and traffic-free route, decided he needed to run through the two of us. “Out of the way,” he said, precociously! In no rush of our own on this steady split, we parted and allowed him through, only for us to overtake him as we exited the Phoenix complex. 4km clocked in for 3:51 for more time in the bank.

I spotted Paul Harris spectating, rather than running this year, for a welcome morale boost. Shortly afterwards on the bridge, I had Lis hand me a bottle of water as she does every year – another one of those little things that allows this race to be faster than its profile would normally allow. Unlike most years, the bottle needed to thaw out a bit more because there wasn’t much water to be had from it! A few sips between Darryll and me didn’t allow much left to be thrown over our heads, so it was fortunate that we weren’t running in the amped up temperatures from a week prior. 5km came in at 3:58 for the split and 19:46 at halfway.

The Bournville Harrier I’d pointed out was narrowly drifting away, such was the level of his ability relative to ours. Barry, however, loomed ever closer with each step. 6k registered 4:03 for some definite slow-down, likely due to the undulations from the country lane.

Turning the corner for the second approach of the climb, I took the lead whilst Darryll and a Leamington Spa Strider, who’d remained with us thus far, sat in behind me. I’d reeled Barry in and gave him some encouragement to latch on to our group, but it was to no avail. His ambitious first half had come back to bite him, though I was still confident he could break 40 minutes with a re-focused final 3km. The climb had definitely knocked some of the wind from our sails the second time around, producing a 7k split of 4:14 and 4 seconds down compared to lap 1.

We took advantage once more of the near-2km long descent, with Darryll moving into position and taking the lead, whilst I followed to gain some recovery. The climb had taken a little more out of me than anticipated, and even with running downhill, I couldn’t get my legs to turnover any quicker. The 8k split also slowed a tad to 3:54, though still within acceptable limits.

Passing my man with the hosepipe, I requested an absolute drenching, which instantly freshened me up for the remainder of the race. Entering the Phoenix complex for the final time, I continued to bring up the rear of our three man pack before moving back into the lead. The 9k split produced 3:51 to match perfectly with lap 1.

I switched up my Garmin to elapsed time and began giving real time updates. As I called out, “36 minutes” a little on from 9k, a whole host of runners all crept out of nowhere to surprise me, Darryll and the Leamington Spa Strider! Renewed interest in a sub-40 finish? Hiding in nearby bushes and skipping out a lap like I used to at school cross-country? Who knows…

Passing Paul and Lis once again, I was spurred on to begin wrapping up the race. I continued to give minute by minute time updates as I led the charge back to race HQ and the finish. My legs had recovered from earlier and I found myself able to open up my stride and push on. Returning to race HQ, I was cheered on by a few kids, shouting out my race number, and also Cannon Hill parkrunner, David Carruthers, stood on the final corner. There was no need for a mad sprint as I knew I was on the right side of 40 minutes!

Here’s the Strava data for the race.

Coming back in with 39:42, that was possibly the most comfortable end to a sub-40 10k I’ve ever experienced. I caught my breath back within seconds as I got to see a flurry of runners crossing the line, including Darryll for 39:43. 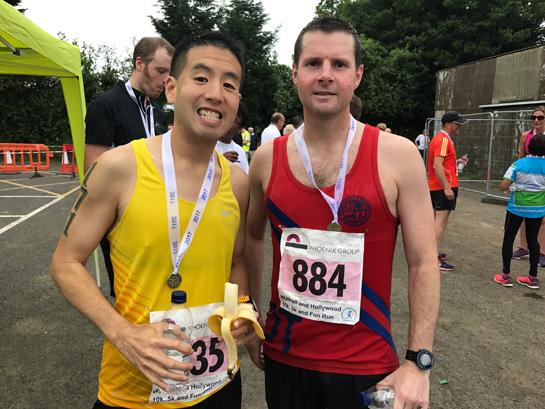 The two of us are pretty damn pleased with the performances, after very little respective work at lactate threshold pace outside of parkruns and maybe the odd session. As I keep reiterating to myself, this season is all about one almighty goal, so I’m about where I want to be concerning 10k pace. If I’m feeling a little sharper by the time of the Magor Marsh 10k in late July, I may see if something in the region of 39:15 is possible.

A 5k warm-down rounded off a pretty satisfying day, with not nearly as much suffering at lactate threshold as originally envisaged!