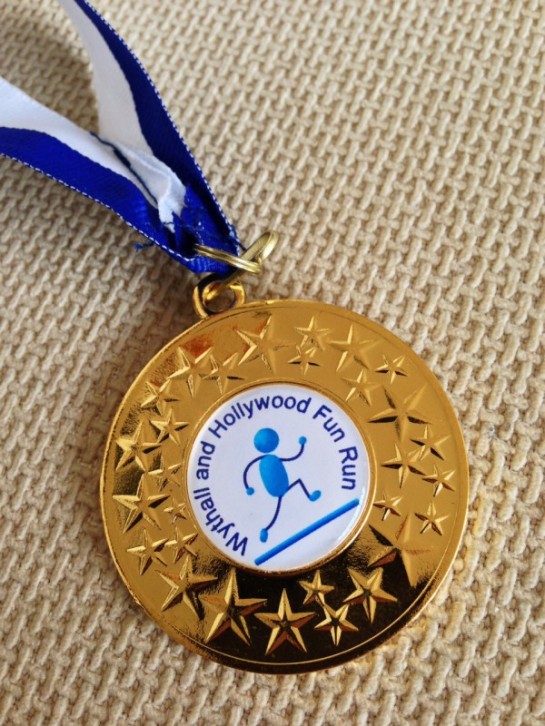 Not all medals are equal – some hurt a lot more

Today’s race was always a bit of an unknown quantity; I was unfamiliar with the course apart from knowing that it undulates and the organisers had never laid on a 10k before. It turned out that today’s 5k and 10k races would be run side by side, which could have gotten messy…

I took it easy-ish at Cannon Hill Parkrun yesterday, choosing to run at 10k race pace. Paula Radcliffe was in the park for an interview and photo shoot with Runners World, ahead of her commentating duties at this weekend’s athletics at Alexander Stadium. It’s not everyday you have a world record holder spectate your Saturday jog around the park!

All smiles at the start line

Today, Lis and I arrived at the packed race venue. There was a real community feel about the event, with plenty of locals out to support or participate. There were also plenty of clubs in attendance with too many to name here. I collected my race bib and proceeded to do my 1-mile warm-up. The heat at 08:45 continued to rise, giving me a bad feeling about the race ahead; this was officially the hottest race I had ever competed in by about 10 degrees. Lis and I made our way to the start line where people soon assembled; the organisers made a request that faster runners head to the front (no chip timing) but nobody took them up on the offer. After a welcome speech by a local official, we were released on the sound of the air-horn. 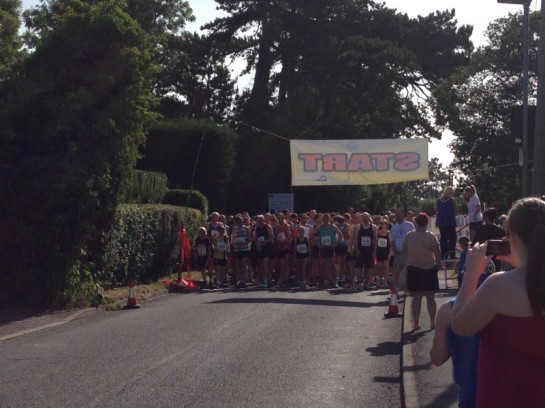 I found my race pace very quickly, with people all around me zooming off into the distance. Using Marathon Talk’s tide analogy, I knew a few of these folks would come back to me later in the race for me to overtake them. The crowds started to thin out after the first 2k which allowed me to take an optimised racing line; everybody else seemed desperate to hang on to the left-hand kerb of the closed roads, even if that meant running further than the officially measured 10k distance.

There were several water stations on the course due to the warm conditions. I will never get the hang of grabbing a cup of water from somebody’s hand without crushing it, so not much water for Andy… Thankfully, I planned for this and I had Lis waiting at roughly 4.5k with a frozen bottle of water for me. I was also carrying an Isogel for a burst of sugar in the second half. 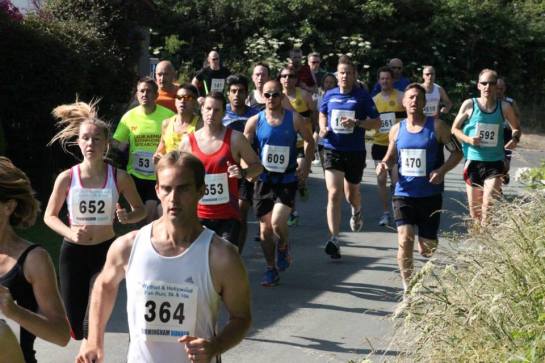 The course undulated and my hill training continued to do me well tackling the inclines, but I now realise I need to work on my downhill technique. I tend to ease off the pace ever so slightly, believing that the descent will give me a few seconds for free when really it should feel the same as going uphill in terms of effort.

After an annoying out and back hairpin, I approached the spot where Lis was waiting for me with my water. Thankfully, the water had begun to defrost and was now refreshingly ice cold, going down my throat and over my head an absolute treat!

I knew the second lap would be difficult due to lack of runners at my pace. Two older guys I was running with were starting to struggle and I overtook them going into 6k. There was a guy just in front of me listening to music that was always just out of reach. I almost caught up to him at one stage but due to some sloppy marshalling, I had no idea which way I was supposed to go and the gap widened again.

By this stage, the Virtual Partner on my Garmin had reported I was 55 seconds off pace for a 42:00 minute finish, so I reverted to Plan B where I just wanted to PB by any margin. The time to beat was 42:53 so it would be close…

No idea what’s going on with my right hand…

The 8k marker came and went and I’m almost certain there was no 9k marker. I saw Lis and looking at my watch, I was at around 40:xx so I knew I had the chance of a PB, so long as I upped the pace. I could see the finish in the distance, confirming with a marshal to stay to the right. The guy listening to music had crossed the line and the nearest guy behind me was at least 30 seconds away, so I knew all the crowd’s cheers were all for me. Not wanting to disappoint, I kicked with 200m left to go and sprinted as hard as I could, pumping my arms and legs to get me to the finish line.

I crossed the line, stopped my watch and keeled over for a fresh 10k PB of 42:28. The marshal at the finish declared, “We have another one that’s died crossing the line!” The guy in front of me grabbed my hand and pulled me up, congratulating me on a good race; I composed myself and told him he raced really well, too, always just slightly ahead of me. The local official that started the race gave me my medal; other goodies on offer were bananas, malted milk biscuits and water. I found a quiet spot on the ground to call my own and sat down to cool-off, leaving a huge puddle of sweat before Lis found me.

It was a pretty enjoyable race with an easier profile compared to the recent Aldridge 10k and Caerphilly 10k. With a cooler day, it could be a potential PB course for some. The only major improvement I would add is the use of chip timing; other local 10k races in the West Midlands of a similar size use it, making for a more accurate and faster results turnaround.

Given the relative ease of getting to the race, I’d dare say I’ll be back again next year!

EDIT – According to the official results, I finished 17th out of 213 10k runners making it into the top 8%.